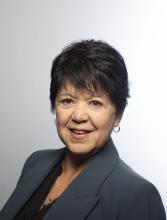 Vice President Sandra Azocar started working for the Government of Alberta in Child Protection Services in 1987 and has been an active member of AUPE ever since.

Azocar previously served as Vice President from 2006 – 2012, the same year she was granted the Union’s highest honour: lifetime membership in AUPE. Azocar is Chairperson of the Union’s Standing Committee on Pay and Social Equity Committee and Women’s Committee.

As the former Executive Director of Friends of Medicare, Azocar has experiencing organizing provincially, nationally, and internationally. She is eager to apply the lessons she’s learned to work with members and allies to fight the Government of Alberta’s attacks on public services and public service workers... and win.

Vice President Azocar lives in Edmonton where she spends as much time as she can spoiling her grandbabies.