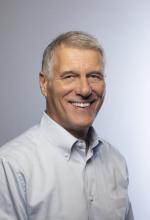 After serving as an AUPE Vice-President from 1993 – 1999 and 2001 – 2003, Guy Smith was first elected as President in 2009. He has been re-elected six times, most recently by acclamation at AUPE’s 2021 Convention. Smith has been an AUPE activist at his worksite, in his Local, on the Executive, and in his community for over 35 years.

Smith brings passion and commitment to the role of President and a vision to build AUPE into the strongest, most active and most vibrant union in Alberta.

A Child and Youth Care Worker on leave from the Yellowhead Youth Centre in Edmonton, Smith has led AUPE through some of its most tumultuous and exciting times, which included significant victories against oppressive governments and employers.

During Smith’s tenure the public image of AUPE as a recognized and credible voice has increased significantly, resulting in AUPE gaining respect as a strong organization that stands up for its members and for the services Albertans rely upon.

Throughout his years as an AUPE activist and leader, Smith has demonstrated his commitment to involving members in decision-making and action. He believes that our struggles are only won through grassroots involvement and mobilization of the rank-and-file membership.

President Smith lives in Edmonton with his partner Sherry; they have two daughters.