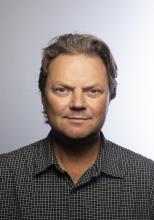 Jason Heistad was elected to his fifth term as AUPE’s Executive Secretary-Treasurer in 2021. He previously served eight years as a Vice-President and has been an AUPE activist fighting for the social wellbeing of his community for over 20 years.

Heistad cannot remember a time when unionism wasn’t a part of his life; his grandfather was an active labour leader whose mentorship still guides his involvement in labour activism today.

Heistad cites his involvement in the movement to keep the Michener Centre for people with developmental disabilities open as one of the highlights of his time with AUPE. Achieving tangible wins like those, along with the long-term strategic planning an organization the size of AUPE requires, keep him going.

Heistad believes that even top-down changes start with bottom-up ones, and he remains committed to member education and grassroots stewardship.

On leave from his position as a Student Enrollment Officer at Olds College, Heistad chairs AUPE’s Standing Committees on Pensions and Finance and sits as a Member of the Sponsorship Board of the Public Service Pension Plan.

Executive Secretary-Treasurer Heistad lives in Innisfail, where he serves as a Town Councillor, with his wife; they have three children.